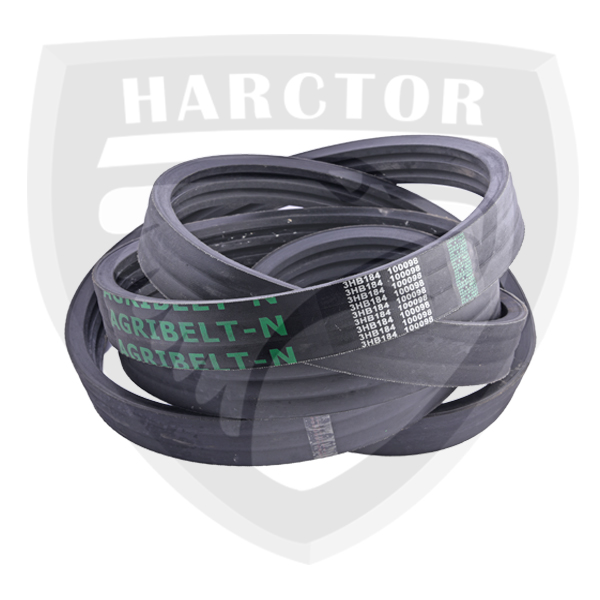 What is a V-Belt?

V belts (also style V-belts, vee belts, or, less commonly, wedge rope) solved the slippage and alignment problem. It is now the basic belt for power transmission. They provide the best combination of traction, speed of movement, load of the bearings, and long service life. They are generally endless, and their general cross-section shape is roughly trapezoidal (hence the name "V"). The "V" shape of the belt tracks in a mating groove in the pulley (or sheave), with the result that the belt cannot slip off. The belt also tends to wedge into the groove as the load increases—the greater the load, the greater the wedging action—improving torque transmission and making the V-belt an effective solution, needing less width and tension than flat belts. V-belts trump flat belts with their small center distances and high reduction ratios. The preferred center distance is larger than the largest pulley diameter, but less than three times the sum of both pulleys. Optimal speed range is 1,000–7,000 ft/min (300–2,130 m/min). V-belts need larger pulleys for their thicker cross-section than flat belts.

For high-power requirements, two or more V-belts can be joined side-by-side in an arrangement called a multi-V, running on matching multi-groove sheaves. This is known as a multiple-V-belt drive (or sometimes a "classical V-belt drive").

V-belts may be homogeneously rubber or polymer throughout, or there may be fibers embedded in the rubber or polymer for strength and reinforcement. The fibers may be of textile materials such as cotton, polyamide (such as Nylon) or polyester or, for greatest strength, of steel or aramid (such as Technora, Twaron or Kevlar).

When an endless belt does not fit the need, jointed and link V-belts may be employed. Most models offer the same power and speed ratings as equivalently-sized endless belts and do not require special pulleys to operate. A link v-belt is a number of polyurethane/polyester composite links held together, either by themselves, such as Fenner Drives' PowerTwist, or Nu-T-Link (with metal studs). These provide easy installation and superior environmental resistance compared to rubber belts and are length-adjustable by disassembling and removing links when needed.